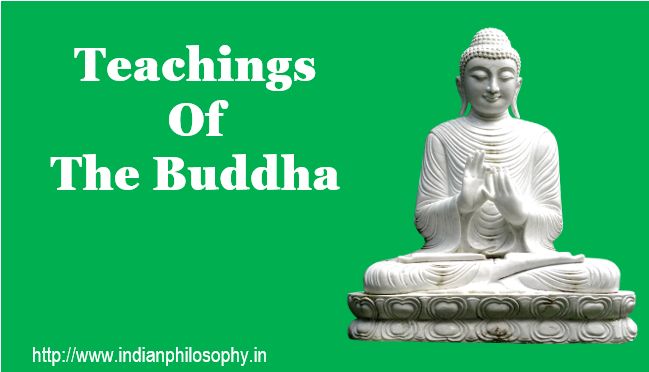 Teachings Of The Buddha

Teachings Of The Buddha: Under these circumstances, it is difficult to say what exactly are the teachings of the Buddha who was mainly an ethical teacher and a mystic rather than a metaphysician and who preached only orally. Yet, a fairly good account of his teachings can be gleaned. It may be said to be three-fold— The Four Noble Truths, the Noble Eightfold Path and the Doctrine of Dependent Origination.

This is the Noble Eight-fold Path

In the old books we also find mention of a triple path consisting of Shila or right conduct, Samadhi or right concentration and Prajna or right knowledge. They roughly correspond to Darshana, Jnana and Charitra of Jainism. Shila and Samadhi lead to Prajna which is the direct cause of liberation.

Buddha’s ethical ‘middle path’ is like the ‘golden mean’ of Aristotle. Self-indulgence and self-mortification are equally ruled out. In his very first Sermon at Saranatha he said: ‘There are two extremes, O monks,

from which he who leads a religious life must abstain. One is a life of pleasure, devoted to desire and enjoyment: that is base, ignoble, unspiritual, unworthy, unreal. The other is a life of mortification: it is gloomy, unworthy, unreal. The Perfect One, O monks, is removed from both these extremes and has discovered the way which lies between them, the middle way which enlightens the eyes, enlightens the mind, which leads to rest, to knowledge, to enlightenment, to Nirvana.’

This is the Noble Eight-fold Path contained in the Fourth Noble Truths.

The doctrine of Pratityasamutpada or Dependent Origination is the foundation of all the teachings of the Buddha. It is contained in the Second Noble Truth which gives us the cause of suffering, and in the Third Noble Truth which shows the cessation of suffering. Sufferings is Samsara; cessation of suffering is Nirvana. Both are only aspects of the same Reality. Pratityasamutpada, viewed from the point of view of relativity is Samsara; while viewed from the point of view of reality, it is Nirvana.  It is relativity and dependent causation as well as the Absolute, for it is the Absolute itself which appears as relative and acts as the binding thread giving them unity and meaning. Pratityasamutpada tells us that in the empirical world dominated by the intellect everything is relative, conditional, dependent, subject to birth and death and therefore impermanent. The causal formula is: ‘This being, that arises.  ‘Depending on the cause, the effect arises’ , Thus every object of thought is necessarily relative. And because it is relative, it is neither absolutely real (for it is subject to death) nor absolutely unreal (for it appears to arise). All phenomenal things hang between reality and nothingness, avoiding both the extremes. They are like the appearances of the Vedantic Avidya or Maya. It is in this sense that Buddha calls the doctrine of  the Middle Path, Madhyama Pratipat which avoids both eternalize and nihilism. Buddha identifies it with the Bodhi, the Enlightenment which dawned upon him under the shade of the bo tree in Gaya and which transformed the mortal Siddhartha into the immortal Buddha. He also identifies it with the Dharma, the Law: ‘He who sees the Pratityasamutpada sees the Dharma, and he who sees the Dharma sees the Pratityasamutpada’ ,  Failure to grasp it is the cause of misery. Its knowledge leads to the cessation of misery. Nagarjuna salutes Buddha as the best among the teachers, who taught the blessed doctrine of Pratityasamutpada which leads to the cessation of plurality and to bliss. Shantaraksita also does the same.

Thus we get the twelve links of the Causal ! Wheel of Dependent Origination:

(3) Initial consciousness of the embryo (Vijnana).

(9) Clinging to this enjoyment (upadana).

Out of these twelve links the first two are related to past life, the last

two to future life and the rest to present life. This is the cycle of birth-and-death. This is the twelve-spoken wheel of Dependent Origination. This is the vicious circle of causation. It does not end with death. Death is only a beginning of a new life. It is called Bhava-chakra, Samsara-chakra, Janma-marana-chakra, Dharma-chakra, Pratityasamutpada-chakra etc. It can be destroyed only when its root-cause, Ignorance, is destroyed. Otherwise, Ignorance being present, impressions arise; impressions being present, initial consciousness arises and so on. And Ignorance can be destroyed only by Knowledge. So Knowledge is the sole means of liberation. Ignorance is bondage; Knowledge is liberation. An analysis of these twelve links show their psychological significance. It is important here to note that life is not regarded by Buddha as a product of the blind play of mechanical nature, but as due to the internal urge, the life-force, the e’lan vital, the will to be born.

The doctrine of Dependent Origination is the central teaching of the Buddha and his other teachings can be easily deduced from it as corollaries. The theory of Karma is based on this, being an implication of the law of causation. Our present life is due to the impressions of the Karmas of the past life and it will shape our future life. Ignorance and Karma go on determining each other in a vicious circle. Again, the theory of Momentariness (ksana-bhanga-vada) is also a corollary of Dependent Origination. Because things depend on their causes and conditions, because things are relative, dependent, conditional and finite, they must be momentary.

To say that a thing arises depending on its cause is to admit that it is momentary, for when the cause is removed the thing will cease to be. That which arises, that which is born, that which is produced, must necessarily be subject to death and destruction. And that which is subject to death and destruction is not permanent. And that which is not permanent is momentary. The theory of No-Ego (naira- tmyavada), the theory that the individual ego is ultimately false is also based on this doctrine. When everything is momentary, the ego is also momentary and therefore relative and false. The theory that the so-called matter is unreal, that there is no material substance (sanghata vada) is also derived from this doctrine. Matter, being momentary, is relative and therefore ultimately unreal. The theory of causal efficiency (Artha-kriya-karitva) is also based on it, because each preceding link is causally efficient to produce the succeeding link and thus the capacity to produce an effect becomes the criterion of existence.

The above account represents the teachings of the Buddha himself. They have been variously interpreted and developed by his disciples and this accounts for the different schools of Buddhism. Religiously Buddhism is divided into two important sects— Hinayana and Mahayana. Hinayana, like Jainism, is a religion without God, Karma taking the place of God. Relying on the words of Buddha: ‘Be a light unto thyself’ (atmadipo bhava), and his last words: ‘And now, brethren, I take my leave of you: all the constituents of being are transitory; work out your salvation with diligence,’ Hinayana emphasises liberation for and by the individual himself. It is the difficult path of self-help. Its goal is Arhathood or the state of the ideal saint who obtains personal salvation, Nibbana, which is regarded as the extinction of all misery.

Mahayana, the Great Vehicle, the Big Ship, which can accommodate a much larger number of people and can safely and securely take them to the shore of  Nirvana from the troubled waters of the ocean of Samsara, dubs earlier Buddhism as Hinayana, the small vehicle. The idea of liberation in Hinayana is said to be negative and egoistic. Mahayana believes that Nirvana is not a negative cessation of misery but a positive state of bliss. It’s ideal saint is Bodhisattva who defers his own salvation in order to work for the salvation of others. Buddha is here transformed into God and worshipped as such. He is identified with transcendental reality and is said to possess the power of reincarnation. The Buddha is the Absolute Self running through all the so-called individual selves. He is the Noumenon behind all phenomena. The Bodhisattva is he who attains perfect wisdom, ever dwells in it, and inspired by the love of all beings, ceaselessly works for their salvation which is to be obtained here in this world. He is ready to suffer gladly so that he may liberate others. He is guided by the spirit of the Buddha who said: ‘Let all  thesins and miseries of the world fall upon my shoulders, so that all the Being may be liberated from them.’  Dry asceticism of the Hinayana is replaced by an enlightened and loving interest in this world.

The negative and individual conception of Nirvana is replaced by the positively blissful and universal conception of it. The denial of God is replaced with the Buddha’s Divinity. The explosion of matter and mind by reducing them to the series of momentary atoms and momentary ideas respectively is replaced by the admission of the relative reality of both, the transcendental reality being the Absolute, the Luminous Body of the Buddha. The greatness of the Mahayana lies in its spirit of selfless service of humanity, its accommodating spirit and its missionary zeal. The Mahayanists are reasonably proud of their faith as a progressive and dynamic religion which throbs with vitality because it has the capacity to adapt itself with the changing environmental conditions, preserving its essentials intact.

The oldest school of Hinayana Buddhism is the Sthaviravada (Thera-vada in Pali) or the ‘Doctrine of the Elders’. The present Pali Canon is the canon of this school. Its Sanskrit counterpart which is more philosophical is known as Sarvastivada or the doctrine which maintains the existence of all things, physical as well as mental. Gradually, from Sarvastivada or Vaibhasika branched off another school called Sautrantika which was more critical in outlook.

The Sarvastivada school cannot be said to be the real teaching of the Buddha. It has ignored some important implications in the teachings of the Master and has misinterpreted many. Some of the main doctrines of the Buddha have been taken to their reductio ad absurdum  pitch. As a matter of  fact, there was nothing in the teachings of the Buddha which would seriously militate against the Upanisads. The Lamp of Dharma bequeathed by the Buddha to his disciples was borrowed from the Upanisads. But the Hinayana made the constant and the luminous light of this Lamp flickering and faint. ‘The Sakyan mission’ , says Mrs. Rhys Davids, ‘was out “ not to destroy, but to fulfill”, to enlarge and enhance the accepted faith-in-God of their day, not by asseverating or denying, but by making it more vital. It were Brahmans who became the leading disciples.’ The Hinayana, therefore, represents not the real teaching of the Buddha, but, as Mrs. Rhys Davids says, ‘the verbal super structures, the formulas often being held up as what he (Buddha) taught.’  Mahayana also says that Hinayana philosophy is either due to the adjustment in the teaching by the Buddha to suit the needs of the less qualified disciples (upaya-kaushalya) or due to their lack of under-standing the real significance of the teachings of the Master.